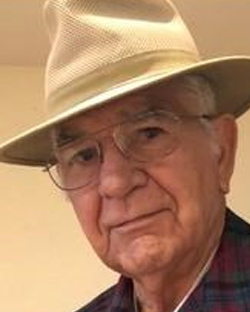 May 10, 1935 – December 22, 2021 Abraham Miguel (Mike) Haro Campoy, age 86, passed away of natural causes on Wednesday, December 22, 2021, at home surrounded by his loved ones in Lathrop, California. He was born May 10, 1935 in Phoenix, Arizona. He was preceded in death by his wife Juanita E. Campoy, his granddaughter Ashley Marie Campoy Willitts, brother Eugene (Gene) Haro Campoy, his mother Dolores Haro Campoy and Grandmother Aurelia Zamora Haro. He is survived by his children Micheale (John Woodman) Campoy-McCarthy, Kelley Marie (Robert) Campoy Willitts, Tami (William) Campoy-Bankhead, Miguel L. Campoy, Christina (Christopher) Campoy-Laughlin, 13 grandchildren and 7 great grandchildren. Dad had a strong sense of family and duty that was instilled in him by his mother and grandmother who were loving and inspiring influences in his life. His first language was Spanish, he learned English in school while learning the value of an education. He was proud of his ethnicity and passed that pride to his children. Dad grew up quick helping to support his family. He joined the National Guard at the age of 15, only to be discharged when they discovered he was under age (rumor was Nana Lola turned him in when her son got orders for Korea)! Two years later he joined the United States Marine Corps where he pursued a lifelong career in aircraft mechanics. He served in Korea and Vietnam. Dad spoke rarely of it but, always with pride of his country. Our father served his country until his retirement after 42 years. He served in the Arizona National Guard, the United States Marine Corps, and the Civil Service Employment with the United States Air Force Reserve. Dad met mom while they both served in the Marine Corps. They were married 56 years when she passed away in 2013. Dad loved to dance with mom, when he heard the music whether in living room or in the middle of Disneyland he would grab her hand and dance! Dad got his private pilot’s license because he loved to fly. He enjoyed working on cars in the driveway. He loved his roses, strawberries and his Dodgers. However closest to his heart was his family, his children, grandchildren, great grandchildren and his friends. Dad had an appreciation of life that you felt in his embrace.