Written by Night For Vets on October 22, 2018. Posted in Gone But Not Forgotten 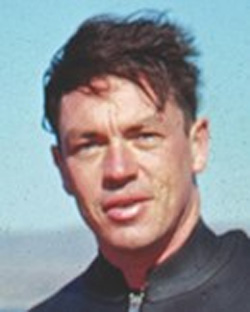 In loving Memory of Adrian McDonald Messner, devoted husband, father, and grandfather. Adrian lost his battle with Alzheimer’s disease and died peacefully at his home on Saturday, October 6, 2018. He was 88. He is survived by his wife, Sandra, his two sons Daniel and Steven, four grandchildren, his brothers Paul and Ron Messner and Sister Margo Morrison as well as many other family members.

Adrian immigrated to California from Canada in his teens. He served in the U. S. Airforce and was deployed to Korea where he served as a Radar mechanic.

He graduated from the University of California Berkeley with a Master’s Degree in Physics and later earned an additional Masters in Engineering from University of California Riverside. He continued to work throughout his life as an aerospace engineer and was an instrumental figure in stress analysis relating to stress fractures in solid rocket propellant.

He enjoyed Skiing, sailing and scuba diving, painting and poetry. His labor of love was building a 40 foot sailboat, “AprŠs Ski” in his barn. He will be greatly missed.