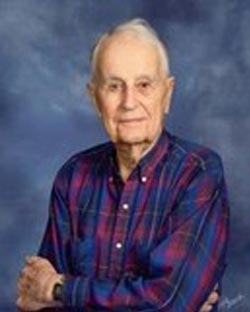 Albert Maas was born and raised on a farm near Farragut, IA on July 13, 1921 to Paul & Clara Maas. He joined the Army Air Corp in 1944 and was stationed in Italy. He met Elise (Lahegue), the love of his life, in Casablanca, Morocco on April 16, 1945, a night of celebration with the fall of Berlin during WW II. They were married in Medea, Algeria on November 16, 1946 and remained married for more than 68 ½ years.

With an Air Force career spanning more than 26 years, Albert and Elise lived in Italy, Nebraska, Michigan, England, Florida, Iowa, Germany, Montana, Alabama and The Netherlands. After retirement from the Air Force, Albert took his final classes to earn his bachelor’s degree in history and a minor in political science from the University of Nebraska, Omaha. Albert and Elise then moved to Riverside, CA in 1971 and bought their house where they lived for 45 years. Albert followed his Air Force career with a 15-year U.S. Postal Service career and then a 24-year driving career as an independent contractor – first delivering motor homes cross-country for National RV and then delivering Lexus automobiles throughout Southern California for Lexus of Riverside, finally retiring at the age of 89.

He was predeceased by his parents Paul & Clara, his wife Elise, his older still-born sister and his younger brother Edward. Albert is survived by his younger sister Carolyn Jackson of Corning, IA, daughter Shirley Taylor of Bonne Terre, MO, son Fred (Carol) Maas of Mission Viejo, CA, 4 grandchildren, 5 great grandchildren and his extended family at Sunrise at Canyon Crest.