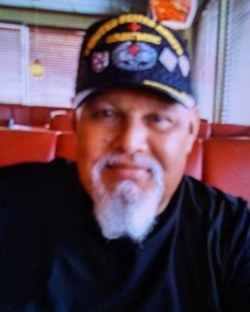 06-07-1951 – 11-29-2021 70, a resident of Colton, CA, took his last breath on 11-29-2021. His soul and spirit was received into the arms of his Heavenly Father. Alex was born to Alejandro (Alex) and Josie Alanis. He is survived by his wife Dianne; his dog Boo; 3 stepdaughters, Jeannette, Frances, Lisa; 8 grandchildren; his sisters Linda (Bobby) Chavez, Jean (Andy) Saldana; his brother Pastor Rick (Jeannie) Alanis and his sister-in-law Lollie Alanis; uncle Joe Ybarra, along with a host of nieces, nephews and cousins. Preceded in death by his parents, his brother Michael Alanis and niece Christy Chavez. Alex enlisted in the United States Army in 1970 and was a Vietnam Veteran. In 1978 he met the love of his life Dianne and was married 42 years. Alex will always have a special place in everyones hearts and will never be forgotten by those who knew and loved him.