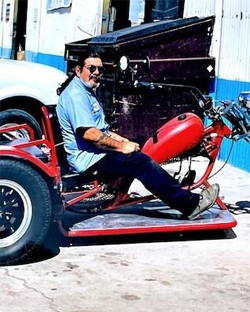 Thermal – Alex G. Dominguez, age 75, passed away on Friday, April 30, 2021, in Palm Springs, CA. He was a resident of Thermal and is survived by his two sons, James Dominguez and Alex Jr. Dominguez. Two granddaughters, Christina Dominguez and Alexis Dominguez. His surviving siblings are Henry Dominguez of Redding, Margie Penalber of Coachella, Rudy Dominguez of Texas, Virginia Broaddus of Yorba Linda, and Regina Dervartanian of Yorba Linda. He is preceded in death by his birth mother, Virginia Dominguez, mother and father Nicholas and Calletana Dominguez, sisters Vera Franco, Ofelia Madril, and brother Richard Dominguez. He took much pride in riding his chopper. Alex served proudly in the Vietnam War as a Private First Class in the US Army. Continue riding in the heavens brother till we meet again.