Written by Night For Vets on September 17, 2019. Posted in Gone But Not Forgotten 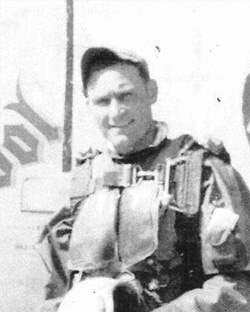 Alex M. Thompson (89) formerly of Indio, California passed away peacefully in his sleep on September 14, 2019 in Palm Desert. Alex graduated from Coachella Valley High School in 1948 where he played all league forward on the basketball team and quarterback for the Arab football squad, the team that in 1947, won the Valley League Championship.

On the day of his graduation from CV High, Alex enlisted in the Air Force and was sent to Norton Bombsite and Autopilots School in Tuscon, Arizona where he trained on B-29s. Alex completed the Aviation Cadet Program scoring first in Academics and second in flying in his class which afforded him the opportunity to join the ranks of the fighter pilots and attend the Fighter Combat School in Las Vegas, Nevada before being transferred to the Chitose, Japan at the front of the Korean War in 1953. Alex held records in both Japan and at George Air Force Base for air to ground gunnery in strafing which were both retired intact when the Air Force switched weaponry. Alex continued to fly with the West Virginia Air National Guard serving 30 years in the Air Force before his retirement as Lt. Colonel. He flew commercially for United Airlines for more than 20 years.

Alex met and married his wife of 49 years Ann Yost, a native of Winchester Virginia, while stationed in Japan. Ann predeceased him in 2005. One of 9 children born to Arlie and Zeta Thompson, Alex is survived by his sister Martha Gallagher of the Salton Sea and by his daughter Lisa Copeland of Indio as well as his nieces and nephews Suzan Sullivan, Dana Johnson, Tim Johnson and Jill Gallagher all of California.