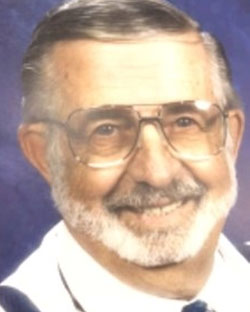 Alfred Leroy Karlson was born on July 28, 1934, in a two story sod house in Hoover, SD. He was the second youngest of 13 children born to Norwegian immigrants, Karl John and Nicolena (Nelson) Karlson. He attended school until the 4th grade in a one-room schoolhouse near Hoover. He then attended 6th through 8th grades in Belle Fourche, SD. He finished his formal elementary education at the 8th grade. He was drafted into the United States Army in 1959. While in the Army, he earned a GED. He was stationed in Panama, where he trained troops in Jungle warfare. His time in the Army ended in 1962. He married the love of his life, Dixie D. (Weyer) Karlson on May 29, 1964. He worked at various jobs including at a coal mine, for Boeing, as a long haul trucker and for the city of Sturgis before finding his calling as a schoolteacher. He earned his Bachelor of Education degree at BHSU (while farming/ranching 110 acres). He taught for 33 years. He taught school in Nisland, SD from 1972-1990 and became school principal in 1979. He and Dixie moved to San Bernardino, CA in 1990, where he taught for SBCUSD until his retirement in 2005. He continued to live in San Bernardino until his passing on January 25, 2022. Romans 6:8 "Now if we died with Christ, we believe we will also live with Him." He is survived by his wife of 57 years, Dixie; his children Josie (daughter-in-law), Karl (Mickie), Tracy, Twyla, Lyla, Clay and son-in-law, Brian. He is also survived by grandchildren, Amy, Brandi (Chris), Billie (Willie), Kimberly, (Daniel), Jennifer, Becky Lee, Cynthia, Sean, Christopher, Nickie (Mike), John (Lindy), Jordan (Chase); his great grandchildren Hannah, Josiah, Sadie, Eli, AJ, Daize, Connor, Wesley (Lisette), Ryan, Liberty, Dakota, Abigail, Kaylina, Natalie, Samuel, Isabelle, Josephine and one great-great grandson, Kayden and numerous nieces and nephews. He was preceded in death by his parents, all of his siblings, son Leroy, and his granddaughter, Amber.