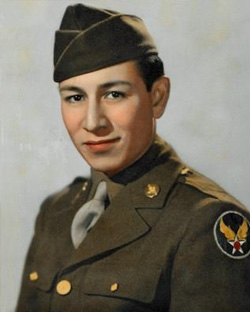 In loving memory of Alfredo (Fred) Sandoval Ayala. Fred passed away peacefully on July 11, 2020. He was born in Los Alamitos, California to Trinidad and Jovita Sandoval Ayala on May 4, 1919. In 1933 his family moved and settled in the Village of Palm Springs and lived on the Indian Reservation in Section 14 until 1953. He was married 61 years to his long-time sweetheart Rita at Our Lady of Solitude Catholic Church in Palm Springs. In 1942 Fred was inducted into the United States Army Air Corps during WWII until he was honorably discharged in 1945. During the latter part of WWII, he was stationed on the military base in barracks located at the Palm Springs Army Air Corps Airfield. He retired after more than 30 years working as a landscaper/caretaker for Mrs. Eugenia Mayer Bolz of the Oscar-Mayer Foods Family. He was a member of the Mexican Colony Club, whose primary function was fundraising for Our Lady of Guadalupe Catholic Church. His calligraphy and oil painting are depicted in the 1920-1930s ancestry book, We Were Here, Too! dedicated to the first 16 Mexican Families that settled in Palm Springs. His passion for oil, acrylic painting and colored pencil drawings, some of which were Palm Springs historical buildings, are cherished by his family. Some family members have referred to him as “Grandpa Moses”. He lived 87 of his 101 years in his beloved Palm Springs. He is preceded in death by his wife Rita. He is survived by his two children, Barbara Eves (Bob), Ronald Ayala (Angel), granddaughter, Ana-Maria Deenen (Charles) and two twin great-grandchildren, Jax and Mila Deenen.