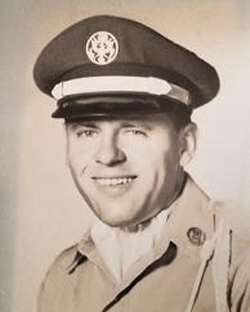 Al passed away peacefully at home of natural causes in Bakersfield, CA on July 17, 2020 surrounded by his loving wife Rita of 47 years and family. Al was born in Fallon, Montana on March 26, 1934 at home to Edwin and Barbara (Bossert) Brenneise, the first born of four children. Family moved to Richmond, CA and on to Lodi, CA. Al only spoke German when he lived in Montana but quickly learned English after moving. Al graduated from Lodi High School in 1953. He belonged to the football team, school band, Moose band and broke the 100 yard dash record. Al also held a job working in his cousin’s radio/T.V. shop and helped take care of his mother, father and siblings. Al was in the Air Force from 1954 – 1959. He was stationed at Mt. Home AFB in Idaho. Al married Barbara Richardson in 1957 and they had three children. Al worked for the U.S. government in various departments including five years in Germany teaching the GI’s. He had a lot of responsibilities for maintaining electronic equipment, training people, making sure all roads and communications were working and designing equipment. He received numerous awards for his work. Al moved to Norwalk, CA and then married Rita Myers-Seamons on September 9, 1972. Al enjoyed square dancing with his wife, coaching his daughters in Bobby Sox and umpiring. Al’s passion was recording music to the latest technology. Al and Rita moved to El Dorado, CA in 1981 where Al worked for the U.S. Forest Service. Al retired in 1985, sold the house in 1987 and together, he and Rita traveled the U.S. and parts of Canada for 27 years as full time RVers. Al was always on the move, not letting grass grow under his feet, saw a lot and met a lot of people. Al was preceded in death by his brother Floyd Brenneise, brother Dallas Brenneise, son Terry Allen Brenneise and stepson Don Seamons. He is survived by his wife Rita Brenneise, sister Shirley Maloy (Larry), daughter Cindy Schiavone (Matt), daughter Cathy Nash (Paul) and stepdaughter Patricia Robb (Curtis), ten grandchildren and ten great grandchildren.