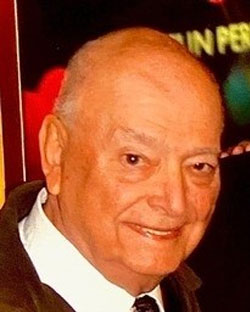 December 2, 1924 – February 28, 2022 Alvin Russo died peacefully at home on February 28th with his loving wife of 68 years, Mary Rose, at his side. Alvin was born in Buffalo, New York on December 2, 1924 to Anthony and Sarah-Leone Russo. He was an only child and grew up surrounded by many family relatives in Buffalo. He moved with his parents to Florida briefly during the depression years. There, he was quickly advanced 2 grades in school graduating high school back in Buffalo at the young age of 16. Al enrolled in Pre-Med at the University of Buffalo but his studies were interrupted when he enlisted in the Army during World War 2 in 1943. He was intelligent and tested high so that he was able to participate in the Army Special Training Program (ASTP). He attended Baylor for 9 months in Engineering followed by Pre-Med at the University of Iowa. He was awarded one of only 32 spots for 132 Army candidates to attend Mid Western Universities and was one of only four accepted to attend the University of Kansas for Medical School. He completed his Medical School training in 1949 just as the Korean War was beginning. He was very proud and grateful for the education he received through the Army. Al was ambidextrous and was a very capable surgeon. He loved surgery but was even more compelled to help the women he encountered while interning and during residency at the Sisters of Charity Hospital in Buffalo. There he treated the underserved population of women who were full of life and laughter. In this specialty of Obstetrics and Gynecology he could bring lives into the world as well as perform surgical procedures that he excelled at. It was at the Sisters of Charity Hospital that he offered a newly acquainted nurse, Mary Rose Hehir a ride home on a rainy afternoon. It was 1950 and the beginning of a lifelong romance. Because of Al’s special training in Breech Delivery techniques, he was offered a ranking position in the Air Force in 1951 as Captain and Chief of OB-GYN at the military hospital on Norton Air Force Base in San Bernardino, CA. In 1953 he went back to Buffalo and married the love of his life, Mary Rose. They then moved to San Bernardino where Al established his medical practice which eventually included six partners. In 1956 his own children began entering the world. He and Mary Rose had 8 children – 5 girls and 3 boys which included a surprise set of twins to finish off the troup. Al moved the growing family to a larger home in Redlands in 1966. It became a place of many family gatherings, parties and charity events. In his spare time Al enjoyed playing golf and became the El Rancho Verde Club Champion in 1962. He also excelled at tennis, ping pong and poker. He and Mary Rose were world wide travelers and particularly enjoyed the cruises they were able to take on the Cunard Lines where their youngest son, Tony, was a "Leisure Specialist". The family was also able to enjoy many family vacations together including a road trip through Italy. In later years the "Russo Family Reunion" became an annual summer event featuring "The Russo Open" golf tournament in Mammoth one year. Nearing his retirement Al became an advocate for San Bernardino Community Hospital successfully negotiating that the hospital remain in San Bernardino in lieu of moving the location to a neighboring community. Dr. Alvin Russo received the "Centennial Guardian Angel Award" at Community Hospital San Bernardino in 2010 and in 2019, he was inducted into the "Physicians Corridor" (Hall of Fame) for holding the position of Chief of Staff there and for his dedication to the hospital for more than 30 years. Other positions and organizations Al gave his time and talents to include: San Bernardino County Medical Society, President of the American Cancer Society in San Bernardino County, President of the Italian Catholic Federation, President of the Shamrock Club, President of Arrowhead Country Club, Eucharistic Minister at Sacred Heart Church in Redlands, Treasurer of the Serra Club, Manager of the Employee Scholarship Fund for the Casa Club at Casa de Manana and host of many fund-raising parties for the University of San Diego. In later years Al and Mary Rose moved from San Bernardino to San Diego to be close to their 3 daughters living there. Al was a beloved husband, father, trusted advisor and physician. He helped bring thousands of babies into the world. He was a kind, fair and fearless diplomat, loved and respected by many. He is loved and will be missed. Al was predeceased by his parents, Anthony and Sarah Russo, his son, Michael Anthony, and grandson, Anthony Silvestri. He is survived by his wife, Mary Rose, their children Mary Russo Andrews (Richard), Sally Silvestri (Mike), Daniel Russo (Tiffany Sanders), Jeanne Wotherspoon (Mark), Margaret (Peggy) Russo Smith (Shane), Terri Russo (Lisa Williams), and Anthony Russo (Christine Jean-Blanc). Grandchildren: Gina and Steven Andrews, Andrew and Julia Silvestri, Brittany Alioto, Marie, Kathryn, Peter and Matthew Wotherspoon, Thomas and Michael Battaile, Paige and Blake Smith.