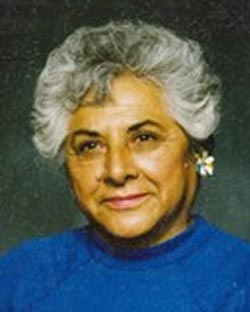 Amelia Harris passed away at her home in Riverside, California on Monday May 14, 2018 after a long illness. She was a longtime resident of Riverside and was 95 years old at the time of her passing. Amy was born in Superior, Arizona on March 13, 1923. She attended high school in Mesa, Arizona, worked in retail for a short time and then enlisted in the Women’s Army Corps, the WACS.

While serving in the military she met her future husband Charles Harris. They married in Texas while both were still on active duty and they both were honorably discharged from the army at the end of WWII. The couple lived in Mesa, Arizona and Fortuna and Santa Maria, California before moving to Riverside in 1950 for reasons of health.

She is survived by her only child, daughter Margaret Colvin. Surviving her also are her two grandsons Sean Beghtol of Washington State, Brian Colvin of Riverside and granddaughter Jamie Cosenza of North Carolina. There are ten great-grandchildren and three great-great- grand- children.