Written by Night For Vets on September 23, 2019. Posted in Gone But Not Forgotten 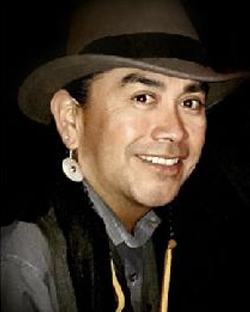 Anderson Philip (Sonny/Calm Waters) Begay passed away on September 10, 2019 at the age of 47 in Santa Fe, New Mexico. After high school graduation Sonny attended the American Indian Art Institute in Santa Fe, New Mexico before joining the U.S. Navy as an Airman. Sonny was a Navy aviation veteran who served with the World Famous Black Eagles Squadron VAW-113 on the USS Carl Vinson where Sonny formed a Native American group on ship.

Sonny was invested in his native culture as a "Bird Singer" as well as promoting the Luiseno Language. He was a talented photographer, and true to his first passion as an artist working in acrylics. Sonny was given the name Calm Waters by an elder in our family and started designing native influenced jewelry. More recently he became involved in films and movies working as a native actor in such series as Longmire and movies like Woman Walks Ahead.

Sonny was a loving and caring son, brother, father and friend; born on April 17, 1972 he made his home in Santa Fe, New Mexico.