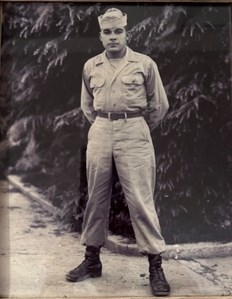 Andres (“Andy”) Munoz Gracia, passed away on Sunday, November 27, 2022, after suffering a stroke in late-January 2022, at the age of 95. He was born in Rancho Cucamonga, CA, to his late-parents, Concepcion (“Chon”) & Dolores (“Lola”) Gracia. He was the husband of our late-mother, Molly Lopez Gracia of Azusa, CA and is survived by his children, Rita Gracia of Tempe, AZ; Lucinda Christine Gracia of Rancho Cucamonga, CA; late-son Andrew Gracia; Diana Gracia-Riggins (Ron Riggins) of Mesa, AZ; Anthony Robert Gracia of Virginia Beach, VA; Maria Gracia-Huggins (Mark Huggins) of Fontana, CA; Mary F. Rodriguez (Johnny Rodriguez) of Marana, AZ and Regina Marie Grosso of Ontario, CA; 21 grandchildren, 55 great-grandchildren and 5 great-great grandchildren. Also survived by siblings: sisters, Eva Lopez of Oroville, California; Julie Velador of Los Banos, California and a brother, Robert Gracia of San Jose, California. At the age of 20, he enlisted in the United States Army where he served as a medic during World War II, stationed in Japan. After his honorable discharge, he married Molly Lopez and they settled in Rancho Cucamonga, California where they raised their family. Andy worked for Town & Country Swimming Pools for many years until he decided to study for his California Contractor’s License and started his own swimming pool company, Andy’s Rebar. He loved the sport of baseball and played with a few senior leagues that traveled to compete in tournaments against other senior teams. A few of his team pictures are published in “Mexican American Baseball in the Pomona Valley” a book about the history of the Mexican American baseball leagues, dating back to the early 1900’s, by Richard A. Santillan with Mark A. Ocegueda, Alfonso Ledesma, Sandra L. Uribe and Alejo L. Vasquez. [pictured standing third from the top left] Our Father was a man well-known for his outstanding work ethic and hard work. He and our late-Mother enjoyed trips to Las Vegas, Nevada for baseball tournaments and playing slot machines. He ultimately moved to Las Vegas, Nevada where he owned and managed The Skillet Caf‚ and eventually retired in Merida, Yucatan until September 7, 2022, when he returned to the United States to spend his remaining months with his beloved family.