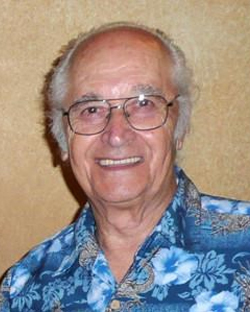 Age 93, passed away February 2022 in Riverside, California. He is the son of Andrew and Elizabeth Komaromy, both of Hungarian descent. Andrew was raised in the Bronx, N.Y. He was drafted into the Army and after serving in the Korean War; he returned to N.Y to marry Lucy the girl next-door in 1955. After having his daughter Kim, they all moved to sunny California and settled in Riverside in 1960. Second daughter Karen was born, but after a battle with cancer, she passed away at the age of six. He found work in California as a mechanical engineer working in various local businesses last being Bourns until he started his own company, Andric Inc. in 1992 until retirement in 2015 at age 87. He loved his work, always designing; parts for aerospace, medical equipment, and various machines. Boating and fishing on Lake Perris, and camping were his past times. He enjoyed his friends having parties and barbecues. Later in life, traveling on cruise ships with his family. He was a great provider for his family and enjoyed helping his friends. Andy is survived by his wife Lucy Komaromy, daughter Kim Komaromy of Riverside, nephew Jim Tripp, niece Cindy Barrier of Riverside and Sandra Tripp-Jones of Cambridge, MD.