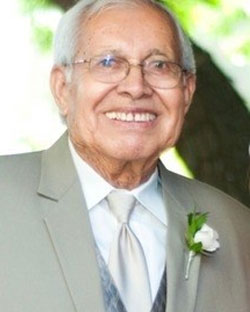 November 10, 1929 – March 18, 2022 Andrew A. Morales Jr., a lifelong Chino resident, passed away at the age of 92 on March 18, 2022 with his loved ones by his side. The world has lost our hero who was a wonderful husband, father, brother, grandfather, and leader. Andrew was born on November 10, 1929, in Chino, CA to father Andrew A. Morales and mother Rebeca Adame Morales. The oldest of three sons, Andrew helped out at the local market and worked any odd jobs he could find starting at an early age. His work ethic and desire to take care of his family led him to enlist in the Army on February 28, 1951. He was stationed in El Paso, Texas where he trained in the field and served for 3 years. During his service, Andrew became a technology operator and moved to San Francisco, CA. He proposed to his childhood sweetheart, Herlinda Gonzales of Chino and they were wed on July 21, 1951 at Our Lady of Guadalupe Church. They were true soulmates from the day they first met in the first grade at D Street School in 1935 and celebrated a remarkable 68 years of marriage in 2019. Honorably discharged on February 27, 1953, Andrew returned to Chino where he became a plasterer and started a family. He purchased property, used his drafting skills and drew blueprints to build his dream home for his family of five. He was proud of this achievement and was recognized by the City of Chino with a Home Beautification Award. His legacy and beautiful home will live on through his family and the countless lives he has touched. Andrew is survived by his children Ronald and Clara Morales, Karen Morales, Diane Gonzales and Darrell Rayburn; grandchildren Andrew Gonzales, Thomas Avila, Michael and Heather Morales, Andrea and Alex Fonseca, Amber Gonzales, Lindsay and Rebecca Morales; great grandchildren Zavia and Zarai Avila, Emersyn and Harper Fonseca, Presley and Emily Morales. Please join us in celebrating his extraordinary life.