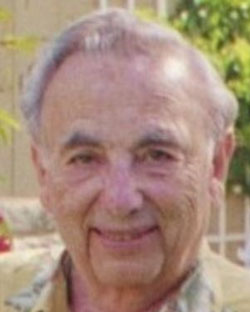 It is with a heavy heart the family announces the passing of Angelo Borzachillo, at the age of 93. He passed at home in his sleep, with family present. He is pre-deceased by his son Steven and survived by his wife of 70 years, Victoria, his daughters, Angela and Camille, three grandchildren, and one great-granddaughter.

Angelo grew up in Pennsylvania. Always intrigued with flight, he obtained his pilot’s license at 16 years old. At 17 years old, he enlisted in the Navy and served as a gunner’s mate on the battleship North Carolina in the Pacific during the Battle of the Philippine Sea, and then in the Shore Patrol in Hawaii. Later, he enlisted in the Air Force Reserve with the rank of second lieutenant. He was an aeronautical engineer at Northrop Corporation for over 30 years. He resided in the desert for the past 15 years.