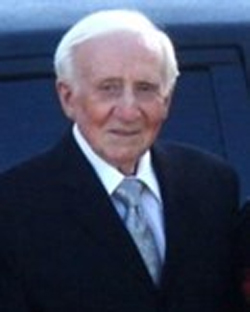 Anthony DeMarco was born on January 25, 1926 in Astoria, NY. He was the fourth and youngest child of Maria (Castriota) and Francesco DeMarco, originally from Mendicino (Calabria), Italia. Anthony was a gifted child with a sharp mind for numbers and methodology, and was a musical prodigy. A multi-instrumentalist from an early age, he was accepted into New York’s All-City High School Music Program where he was First Clarinetist for three years, played Carnegie Hall, arranged music, and attended The High School of Music and Art (what is now F.A.M.E., the Fiorello H. LaGuardia High School Of Music & Art and Performing Arts), a magnet school where the most gifted and talented students of New York pursued their talents in art or music while also completing a full academic program of instruction. Anthony went on to study and graduate from the prestigious Juilliard School, a performing arts conservatory, before completing his higher education at Teachers College, Columbia University, earning a Master of Arts in Music and Music Education.

He enlisted and served during WWII in the United States Army Air Forces, during which he was involved with the Armed Forces Army band program, was band leader at officer club performances, and earned honors that included the American Theater Ribbon and the WWII Victory Medal. Upon honorable discharge he remained in the reserves while he returned to his native New York, where he continued performing music and educated the next generation as a teacher in the New York Public School system.

On June 29, 1957, he married his sweetheart Pamela (n‚e Peters) at St. Catherine of Siena in New York after a six-month courtship. Two years later Anthony and his young bride ventured west for professional opportunities. For more than thirty years Anthony was a well-respected teacher, counselor and band director in the Fontana Unified School District.