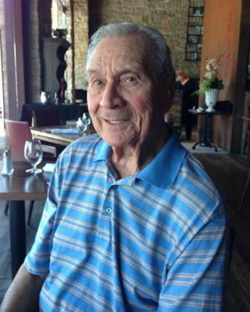 Anthony Lawrence Manne, the youngest child of Lorenzo and Teresa (nee Coppotelli) Manne, was welcomed into the world on October 10, 1922, in Rockford, Illinois, and baptized at St. Anthony of Padua Church. He would prove to be an active little rascal, much loved by his parents, his older brothers Andrew and Alfred, and his older sisters Lucy and Ann.

Anthony attended the Rockford schools through high school where his favorite subject was history and he enjoyed playing basketball, track, and football. After graduation, he enrolled at Northern Illinois University in DeKalb. Like so many young men of his generation, WWII entered his life, and he enlisted in the United States Marine Corps, serving in the Philippines and China with Marine Air Group 32 (MAG32).

Four years later he returned to finish his education at NIU and lettered in basketball, baseball, and track, serving as captain of the track team. He was a member of Epsilon Pi Tau International Honorary Society and earned a Bachelor of Science Degree in Education in 1949. He first taught in the nearby city of St. Charles and then in the Rockford City Schools. During this time, he earned a Master of Science Degree in Education at Oklahoma State.

In 1957 he and his young family left Illinois and moved to Chico, California, where he joined the staff at CSU Chico. Later in his career, he taught at Santa Ana City College, the Agoura Schools, and the Los Angeles County Schools.

Anthony enjoyed the big band sound, the music of Frank Sinatra (“My Way” was his favorite), and playing golf, often teeing up in the Vince Ferragamo Golf Tournament in Orange County and several local desert golf events. When he retired in 1992, he dabbled with making chocolates, which led to the creation of his signature chocolate, “The Turtle,” and the writing of his recipe book for candy makers called Anthony’s Chocolates On-the-Go, Done My Way.

Doing what he loved, he taught chocolate-making classes to community groups and participated in Book Fairs, becoming known as “The Chocolate Man.” People who attended the events looked for him in his signature white coat and chef’s hat. Sharing his chocolates with friends and family always brought a smile to his face.

A life-long follower of politics, he stayed informed and voted in every election. He was a long-time member of the Palm Springs Writers Guild and a loyal Yankee fan. Watching the sports channels brought him great pleasure as did the laughter, camaraderie, and fun of his circle of close friends.

Anthony passed away on October 8, 2020. He is survived by his loving wife of 40 years Carol and, from a previous marriage, son William and his wife Wyannette and son David and his wife Linda; grandchildren Matthew (wife Krista), Dane (wife Shannon), and Gretchen (husband Richard); great-grandchildren Ryan, Maverick, Sammy, Logan and Owen, and loving nieces and nephews.