Written by Night For Vets on May 11, 2020. Posted in Gone But Not Forgotten 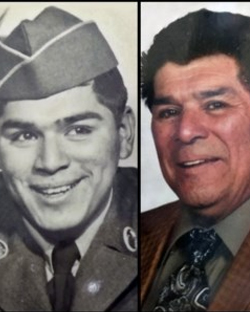 Antonio Falcon Campos, aka Tony to friends and acquaintances, Pop and Grandpa to family, left this earthly world to meet our heavenly father. Tony was born to parents Felipe and Estela Campos on June 13, 1935 in San Bernardino, CA. He was preceded in death by his loving wife of 55 years Ernestine in 2009 and his oldest son Edward in 2013. He is survived by his children Fred (Veronica) Campos of Beaumont, CA, David (Elizabeth) Campos of Highland, CA, Anthony (Jeanne) of Phelan, CA, Cynthia (Fidel Jr.) Cruz of Highland, CA, and Yolanda Campos of San Bernardino, CA. Also brothers Leo (Grace) Campos of Fort Mohave, AZ and Porfirio (Paula) Campos of San Bernardino, CA. Tony also leaves 13 grandchildren and 26 great-grandchildren. A special acknowledgement to Adeline Cancino for providing Tony companionship in accompanying him to his love of dancing, going to casinos, traveling cross country through the midwest and attending family and other social events as he was a member of the local VFW Post 8737 in San Bernardino and the American Legion Post 155 in Colton, CA. Tony attended Ramona Elementary, Alessandro Junior High and San Bernardino High School. Later in his adulthood, under the G.I. Bill he attended San Bernardino Valley College in their Automotive Technology program that helped him to advance in his working career. Tony proudly served his country for 2 years in the U.S. Army during the Korean War stationed in Alaska in a special Ski Patrol unit until his honorable discharge. After the military, he worked briefly at Kaiser Steel Mill in Fontana, CA. but pursued the opportunity to work in civil service for the U.S Government at the former Norton Air Force Base in San Bernardino. He wore many hats there working in the capacity of a Security Police Officer, then in the base commissary, transportation driver on the flight line and finally ending his working career retiring as a Jet Engine Mechanic prior to the base closure in 1993. Prior to his retirement, he saw an opportunity and re-enlisted in the military serving as a reservist in the U.S. Air Force. He also retired from the reserves with the rank of Technical Sergeant instructing other recruits/reservists in all aspects required for the maintenance of jet engines to military specifications. During his time serving as a reservist, he was deployed on many assignments within the Pacific Rim to the Phillipine Islands, Japan, Guam, Panama and Hawaii. He would always remind his family and friends at family barbeques that he truly enjoyed this time traveling with other military reservists to other countries to experience their culture and food.