Written by Night For Vets on May 17, 2018. Posted in Gone But Not Forgotten 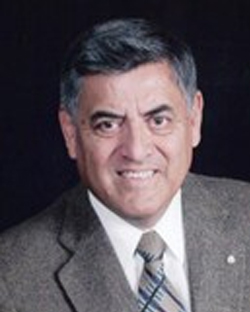 Tony was born on March 26, 1944 in San Bernardino, CA and passed away on April 28, 2018 in Perris, CA. He is survived by his wife of 48 years, Cecilia (CeCe); their son Thomas Joseph and his wife Christina; his grandchildren Alexis Taylor and Jakob Dylan Ramirez; brothers and their spouses, George P. & Debbie Ramirez, Jess Ramirez, Charles P. Ramirez and Robert P. & Linda Ramirez. He was preceded in death by his parents, Antonio R. and Consuelo P. Ramirez.

He wanted to be a police officer and joined the San Bernardino Police Dept. as a police reserve but his dream was never realized. He worked for the County of San Bernardino-Office of Management Services (lSD) as a warehouseman. He retired after 37 years of service as a Teleprocessing Specialist.

Tony became involved with the Grand Terrace Community Soccer league when our son decided to play soccer. He was an assistant coach for Dave Widor for the team “The Red Barons”. He then coached our son under the team name “The Seahawks”. When our son played for a traveling team, Tony continued coaching for the GT soccer league, coached our granddaughter Alexis then continued to referee for the league retiring after 25 years.

Tony also belonged to the Loma Linda Lopers. He completed 3 LA marathons, the first one when he was 59 yrs. old.