Written by Night For Vets on April 8, 2020. Posted in Gone But Not Forgotten 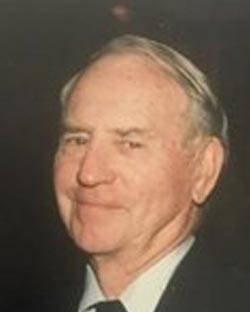 Arlo “Coach” Gard passed away at his home of natural causes on March 31, 2020, he was 94 years old. Born in Kearney, Nebraska on July 13 1925, Arlo was raised as an only child to Gladys and Herbert Gard. In 1942 at 17 years of age, and needing his mother’s written permission, Arlo enlisted in the United States Marine Corps. Assigned to the 3rd Marine Division, 12th Marine Regiment, Arlo saw combat action on the islands of Bougainville, Iwo Jima and Guam. Arlo remained very proud of his Marine Corp heritage, displaying the Corps flag at his house daily.

At the conclusion of WWII Arlo returned to Kearney and attended Kearney State Teacher’s College where he played football, basketball and track. While attaining his B.A. in Physical Education Arlo met his future wife, Kathryn Powell, whom preceded Arlo in death in 2012. Later Arlo would earn an M.A. in Educational Guidance at the Univ. of Wyoming and after 4 years teaching and coaching in Nebraska Arlo and his wife moved to California where his wife’s three sisters were teaching.

During his 33-year career with the Riverside Unified School District Arlo first taught at University Heights Junior High School. Seven years later Arlo would move on to open Rubidoux High School and in 1966 move schools again to spend the remainder of his career at Riverside Poly High School. Arlo coached many sports and a multitude of athletes over the course of 39 years. Arlo earned many coaching awards for his exemplary service. Arlo was inducted into the Kearney State Hall of Fame as well as the Riverside Hall of Fame.

Arlo was well known for his great ability to tell stories of former players and specific events from games long forgotten by others. There were many local basketball coaches whom loved to talk shop with Arlo in his later years. Additionally, Arlo was able to recall and share stories from his service in the United States Marine Corps with great clarity. Arlo was an avid golfer and in his later years became very active at the Janet Goeske Center playing bridge and coaching one of the pool teams.