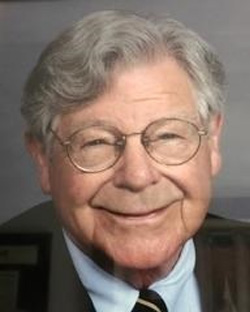 1923 – 2021 Arthur Littleworth passed away peacefully at his home on October 18, 2021. He was 98. Born in Anderson, California, he was the first child of British immigrant parents. At graduation from Washington High School in Los Angeles, he was awarded a scholarship to Yale. Arthur graduated from Yale in 1944, but received his degree by mail since he was already serving in the U.S. Navy (1944-1946) aboard the USS Currituck one of the fleet that accepted the surrender from Japan. After the war he earned a masters degree in history from Stanford and then went to Yale Law School, earning an LLB in 1950. While in law school, he married Evelyn Low. That same year Arthur took a job with Best Best & Krieger because he saw Riverside as a good place to raise a family and because it offered opportunity for community service. He served on the Riverside School Board (1958 to 1972), including 10 years as president. In 1965 he led the integration of the Riverside schools the first integration of a large school district in the nation. In 2014, he published No Easy Way, his personal memories of that time. In 1976 he became the first president of the Mission Inn Foundation, a group of Riverside citizens charged with the operation and restoration of the Inn that the City had recently purchased. He also served as an early president of the Citizens University Committee (CUC); and he established an endowed scholarship for Riverside students attending UCR. During a long career, Arthur represented the State Water Contractors (serving 20 million people); East Bay Municipal Utility District (serving Oakland, Berkeley, the East Bay); Riverside, Pasadena, Ventura, the Long Beach Desert Water Agency; the Metropolitan Water District; the Irvine Company. He also represented the City of Riverside and about 4000 Riverside area pumpers in the litigation among San Bernardino, Riverside, and Orange counties over the waters of the Santa Ana River. Settled in 1969, the litigation assured Riverside its principal source of water that is still in effect today. With BB&K law partner Eric Garner, he published California Water. Now in its third edition, it is the definitive resource in universities and for attorneys practicing water-law. In 1987 the U. S. Supreme Court appointed Arthur as Special Master in Kansas v. Colorado, a case that involved the water rights to the Arkansas River. Tried in five phases over 17 years, the case established financial damages for shortages in interstate river flow. Arthur has received many honors: the “Young Man of the Year” Award (1955); Outstanding Elected Official (1966); Citizen of the Year (1987-88); “Top 100 Lawyers in California” (2001 and 2003); the “Frank Miller Civic Achievement” Award (2004); Honorary Doctor of Law, La Sierra University (2017). In 1994, Arthur married Peggy O’Neill Shaw. Their first date, a Ram football game, was arranged by Arthur, a passionate Ram fan, who had season tickets since the 1950s. Peggy and Arthur traveled the world, enjoying walking trips with Riverside friends in England, Ireland, Switzerland, Italy, France. Famous for wearing traditional clothes (a coat and authentic British Regimental striped ties, even after the office dress code became informal), Arthur was also legendary for elaborate Halloween costumes: The Blue Man Group, an Asian monk, a cone head, Dumbledore, a saloon girl, Olive Oyl. A survivor of breast cancer in 1988, he suffered a massive stroke in 2008. After countless hours of physical therapy, he regained limited speech and was able to walk with a cane. The stroke did not affect his mind, however, and, being left-handed, he continued to write on his infamous yellow pad. In 2016 he began painting with acrylics; and until recently, he advised BB&K attorneys on water cases. Preceded in death by his first wife Evie and a sister Rosemary Ciolfi, Arthur is survived by Peggy, his wife of 27 years; a sister Gwen Mills; daughter Anne (Craig) Taylor; son Todd (Pamela) Littleworth; stepchildren Adam (Melissa) Shaw and Molly (Robert) Martin; grandchildren Brooke (Scott) Williamson, Cameron (Tara) Taylor, and Ian, Robyn, and Kelsey Littleworth; step-grandchildren Ellie and Jack Shaw and Emma, Opal, and Arrow Martin; great-grandchildren Barrett and Archer Williamson and Wyatt Taylor.