Written by Night For Vets on September 18, 2020. Posted in Gone But Not Forgotten 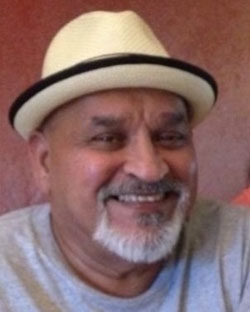 Arthur Montoya II, 70, passed away peacefully due to complications from the COVID-19 virus at JFK Memorial Hospital on September 10th, 2020.

Art, as he was known to his many friends and family, was born on August 7th, 1950 in Indio, California. He attended Coachella Valley High School and graduated in 1968. He was drafted into the US Army soon after and went on to serve during the Vietnam War. After returning home he attended College of the Desert on the GI Bill and received his associate’s degree.

Art was employed with the Imperial Irrigation District for an impressive 43 years; he was well known in the district, making lifelong friends in the process. Along with his cousin, he was a local business owner for 28 years at Teresa’s Cafe in Indio. Teresa’s Cafe was founded in November 1948 by his grandmother Teresa C. Gallardo, a native of Jalisco Mexico, who came to Indio in 1945. In 2008, Teresa Cafe closed its doors. Throughout its 60 years of business, Teresa’s Cafe provided authentic Mexican food to generations of families who made Teresa’s Cafe a family tradition.

Art was known for his humor, his ability to light up a room just by walking into it, and of course, his signature mustache. A man of many talents, he had a love for music that was unparalleled. Art played the saxophone, drums, and several other instruments. A fan of the good things in life, Art was a phenomenal cook. He played softball, listened to country music, went camping and fishing, took family vacations, had a well-developed taste in cigars, and never met a casino he didn’t like. He was a fan of both UC Berkeley and UCLA, and he was loved dearly and will be missed immensely.

He is survived by his companion Maria Del Socorro Sanchez, his two sisters, Martha Anderson and Sandra Osante, his four children, Vicente C. Montoya, Arthur Montoya III, Olivia Geidl, Jose Amador, and his many grandchildren whom he loved dearly. He is also survived by his beloved Godchildren and many nieces and nephews. Art was preceded in death by his mother Salima S. Calderon and his father Vicente Sanchez.