Written by Night For Vets on January 31, 2020. Posted in Gone But Not Forgotten 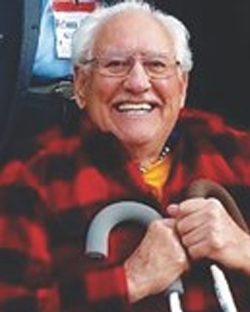 Benjamin Ray Candelaria (aka Candy) passed away peacefully in Cottonwood, AZ after suffering a number of years from Alzheimer’s disease. His wife of 43 years, Barbara, and his stepson, Christopher Silva precede him in death. He leaves his daughter, Rebecca Cooper (Gene) of Prior Lake, MN; his son Benjamin Candelaria Jr. (Hannah Roosa) of Providence, RI; his daughter, Marilyn Granados and his son, Matthew Candelaria, (Minta) both of Prescott, AZ. There are 8 grandchildren who include Christopher, Emily and Nicholas Cooper; Benjamin Ray III, Hannah and Sophie Candelaria; Sarah and Samantha Granados. Ben loved his grandchildren as long as they didn’t get between him and his television. "You make a better door than a window!"

Born and raised in Redlands, CA, he worked in the orange groves lighting smudge pots while attending Redlands High where he met his wife, Barbara. He joined the United States Navy as a teenager (fudging his date of birth) during WWII before transitioning to the United States Air Force at its inception. In the Air Force, he achieved the rank of Chief Master Sergeant (E9) and earned countless awards and Medals of Honor. He served in three wars: WWII, Korean and Vietnam. He retired from the USAF in 1975 at which time he went to work for both Rockwell and Raytheon Intl. in Corona, CA. He then joined the US Department of State and served over ten years. His military and DOS careers included assignments in Europe, Asia, Africa, the Middle East and the United States. He put down permanent roots with Barbara in Prescott, AZ in 1992 after retirement. Barbara passed away in 1997.

Ben was an avid golfer and was on many a bowling team. He taught each of his children how to spot bowl, which was approached with the discipline and seriousness he felt was deserved of his much-loved sport. The last love of his life was a 1992 BMW 535i, picked up from the factory in Stockholm, Sweden and shipped to Long Beach Harbor where he welcomed her with open arms. Just ask anybody. His friends, acquaintances or even the mailman. Yep, they all knew how much she meant to him. Ben enjoyed a good meal and would eat just about anything except mushrooms. "Fungus!" When a bowl of "frijoles and beans" was placed before him his reliable exclamation would be "I’ve died and gone to heaven!" He must be enjoying a bowl with flour tortillas and chili right about now.