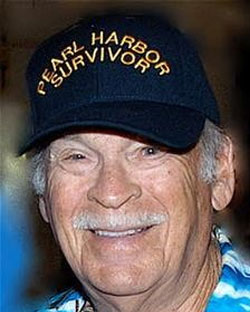 Lt. Col. (Ret) Bernard “Bernie” Rubien passed away peacefully at his home in Rancho Mirage, CA on May 14, 2020. He was a 101 year old Pearl Harbor Survivor. “The Colonel”, as his friends often called him, joined the service January 20, 1943 and retired July 1, 1966. He lived in Riverside, CA for close to 15 years. He is survived by daughters Elaine Lyons, Lois Flood, Barbara Pendergast (Kerry), Carol Streeter, Janet Rubien and son Roger Rubien. He also leaves behind 9 grandchildren and 14 great grandchildren. He was preceded in death by his wife Yeonna. After 25 years of military service, Col. Rubien worked for Riverside County Health Dept. where he set up the first food stamp program in the county, became Clerk of the Court at Riverside Municipal Court and finally served as administrative assistant to Assemblyman Walt Ingalls. When asked about the secret of living a long life, the colonel would smile and say “You’ve got to have a lot of birthdays.”