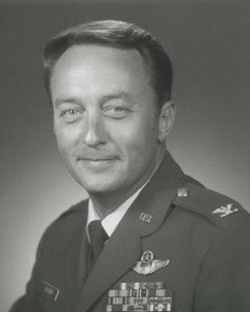 January 13, 1933 – August 22, 2021 Bert E. Grigsby, Retired USAF Colonel, of Highland, California, passed away on August 22, 2021 at the age of 88. Bert was born January 13, 1933 in San Diego, California. He enjoyed sports and was a varsity pitcher at Hoover High and San Diego State. While in college, Bert met his future wife, Eloda Miller. They were the first married couple to graduate together from San Diego State. He served as President of Sigma Chi Fraternity, completed the Air Force ROTC Program, and earned his degree in Physical Education. Bert loved music and joined the Buster Carlson Dance Band in high school, playing piano with them into his college years. Many performances were held at the Trianon Ballroom in San Diego. He was a member of the Musician’s Union for over twenty years. During his twenty-six years in the United States Air Force, Bert held a variety of flying and management positions. With the exception of his tours in Germany and Southeast Asia where he flew with units of the Tactical Air Command, Colonel Grigsby gained most of his flying experience in the Military Airlift Command, where he flew heavy transports (C-97s and C-124s) and a utility jet transport (CT-39). He was rated as a command pilot with over 7200 flying hours and 878 missions in Southeast Asia. Colonel Grigsby’s staff and command assignments were diverse. He received his Master of Science Degree from the University of Southern California. He later served as an Assistant Professor at USC in their ROTC Program. He served as Chief of the OJT Branch, Chief of the Training and Education Division, and Chief of the Career Progression Division in the Directorate of Personnel Programs at the Headquarters of the Military Airlift Command, Scott Air Force Base, Illinois; Commandant of the MAC NCO Academy, Commander, 1400 Military Airlift Squadron, followed by Deputy Base Commander, Norton Air Force Base, California; and Chief of Training Requirements, Plans, Programs, and Technical Support, National Security Agency, Fort Meade, Maryland. After his Air Force Retirement, Bert co-owned a California Pools Franchise in San Bernardino, designing and selling pools. He then joined the Colton-Redlands-Yucaipa Regional Occupational Program (CRYROP) as their Business Manager from 1984 until 1996. Bert was a member of the Orange Empire Military Officer’s Club and served several years as their Vice President. He was a member of Rotary Club of San Bernardino North, and a member of the Loma Linda Lopers Running Club in the 1990’s. While a member of the Lopers, Bert ran a number of LA Marathons, as well as several Honolulu Marathons. Bert was preceded in death by his parents, Albert and Zada Grigsby of La Jolla, California, and sister Leah Grigsby of Maui, Hawaii. He is survived by his wife of nearly 68 years, Eloda Grigsby of Highland, California, and daughters Teri Grigsby of Highland, California, and Joni Horton (Alan) of Yucaipa, California, three grandchildren, Carson Hilliker of Yucaipa, California, Zion Hilliker (Kristy) of Sequim, Washington, and Lauren Erdesky (Robert) of Valparaiso, Indiana, as well as five great-grandchildren, Zach, Harper, Sawyer, Bradley, and RJ. He is also survived by his brother-in-law and sister-in-law, Don and Merlene Miller of Yuma, Arizona, and four nephews, Steve, Bruce, Kenny, and Marty Miller.