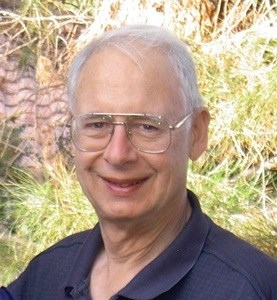 1933 – 2022 John Blair Ceniceros passed away peacefully, surrounded by his children on Thanksgiving Day, 2022 at the age of 89. Blair was born in Los Angeles and grew up in Redlands, graduating from Redlands High School, and then attended Occidental College in Los Angeles. He left college to serve in the U.S. Army for two years, posting in Germany. In 1957 he returned to Occidental College to complete his Bachelor of Arts. He went on to earn his master’s degree at the University of Redlands. Blair launched his teaching career at Beaumont High School before joining the faculty at Mount San Jacinto College in 1965 during the construction of its earliest buildings at the current main campus. He taught there until his retirement in 1994. Blair taught many subjects including English literature, Shakespeare, writing, and film studies. He was known for creatively presenting classical themes in modern contexts, such as the mythology of the Star Wars film series. He developed a reputation as a tough teacher who expected a lot from his students, yet had an exceptional talent for engaging them and offering as much support as needed to turn a poor grade on a paper into an A. It was common for former students to approach him years later to thank him for turning around their academic careers or inspiring them to go into teaching. Blair served as president of the college’s academic senate, led negotiations of contracts between faculty and the administration and, after retiring, wrote a book to commemorate the 40th anniversary of the founding of MSJC that documented its early history. While in college, Blair met the love of his life, Kay McPherson, through a shared passion for music and opera. They considered La Boheme by Puccini to be “their opera”. Blair and Kay shared much joy watching the assent of the careers of Blair’s sister, Lorna, and her husband Enrico Di Giuseppe to become noteworthy opera singers. Blair and Kay were married for almost 61 years and shared a romance of epic depth and duration. Anyone who spent more than five minutes with Blair received a dissertation on how wonderful, intelligent, and beautiful Kay was and that he didn’t know how he had been so lucky to share this life together. Blair was proud of Kay’s accomplishments as a Riverside County Supervisor, yet she credited Blair with providing her with the loving support and encouragement that propelled her to realize her potential. Blair and Kay were active in their communities. They acted in community theater together in Beaumont and Hemet, helped start the first recycling center in the Hemet-San Jacinto Valley, and were active in local politics and environmental causes. They shared their passion for California’s beautiful natural resources with their three children from an early age, including going on long family camping excursions in their 1968 VW camper van through the state’s mountains, forests, and beaches. After retiring to Idyllwild, CA, Blair helped found and served as president of the Mountain Communities Fire Safe Council. which became a national model of effective fire prevention for communities in high fire-risk areas. Blair is survived by his three children and their spouses Kevin and his wife Melissa, Bruce and his wife Andrea, Lara and her husband Joe, and six grandchildren Eric, Evan, Jordan, Cameron, Annika and Kira.