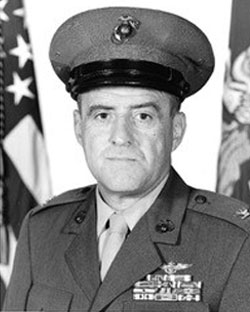 July 12, 1931 – October 10, 2022 Colonel Arthur Bruce Colbert (USMC retired) passed away on October 10, 2022, in Riverside, CA. Bruce was born on July 12, 1931, in Chester, Illinois to Daniel and Leila (Barber) Colbert. His father owned a service station where Bruce worked weekends, and although the family never had a lot of money, he didn’t recall missing out on anything. Bruce was selected for the NROTC program at the University of Missouri, and in May 1953 graduated with a BA in Political Science. While at Missouri, Bruce met Jean Highly who, in his own words, was “a cute little gal” and within six months they were engaged and married. After graduating, Bruce was commissioned a Second Lieutenant in the Marine Corps. He and Jean then drove, for the first but not the last time, to Quantico, Virginia for Basic School. Major duty assignments include 4 years in HMX-1 (Marine One) flying both Presidents John Kennedy and Lyndon Johnson; serving as Executive Officer of Squadron HMM-164 flying CH-46s out of Phu Bai, Vietnam; and as Commanding Officer of HMM-165 during which his squadron participated in Operation EndSweep the clearing of mines in Haiphong Harbor in North Vietnam. Follow on tours included: Commanding Officer of Marine Air Base Squadron-24 in Kaneohe, Hawaii and CO of Marine Air Group 16 in El Toro, California. Bruce flew over 300 combat missions and was awarded the Distinguished Flying Cross, the Legion of Merit, a Purple Heart, as well as other distinguished service medals. After 27 years and 9,000 hours of helicopter flight time, Bruce retired as a full Colonel in 1980. He spent the next 11 years at Northrup-Grumman Aviation on the B-2 program before his final retirement in 1995. Bruce and his wife Jean traveled extensively after his retirement, with Bruce’s top trips being touring the Normandy D-Day beaches and walking the WWI fields of Verdun. At home he enjoyed playing golf, although he never broke a 100, reading historical nonfiction, and watching WWII movies. Bruce was a lifelong St. Louis Cardinal’s baseball fan and a die-hard Missouri Tigers football enthusiast and one of his greatest pleasures was watching their games on television. Bruce was a Board member and past President of the USMC/Combat Helicopter and Tiltrotor Association (POPASMOKE) and was a key financial supporter of the POPASMOKE Scholarship Program which awards academic and technical school grants to Marine Corps dependents. He was a lifelong member of the March Field Museum Foundation and served over 20 years on the Board of Directors during which Bruce and Jean volunteered countless hours and participated in many fundraising activities. In addition, for over 50 years, Bruce was a member of the Order of the Daedalians, a fraternal association of American military pilots. Bruce is survived by his daughter Cathy Colbert, son Chris Colbert (Sindy), granddaughter Christa Colbert, and his brother Nick Colbert (Margie) of Ft. Madison, Iowa. In remembrance of Bruce, please consider donating to the Wounded Marine Fund or Wreaths Across America.