Written by Night For Vets on September 5, 2018. Posted in Gone But Not Forgotten 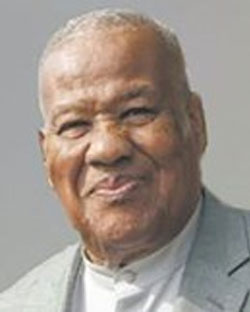 The family of Calvin Hobbs, Sr. would like to inform you of the passing of their father. Born in Eastman, Georgia on February 28, 1928. Calvin Joined his beloved wife Alta Lee and claimed his heavenly reward when he passed away peacefully on August 22, 2018. Calvin honorably served in the United States Navy from 1946-1949 where he was discharged in San Diego CA.

Soon after, he met and married Alta Lee Davenport and she introduced him to the Christian life. He embraced it wholeheartedly and served as a dedicated and humble servant of God, pastoring the church of God in San Bernardino for over five decades. His wisdom, generosity, and guidance was felt and sought around the country.

In addition to his pastoring duties, he had a long and successful career with the Santa Fe Railroad beginning in September 1950. Calvin retired from Santa Fe as the Power House supervisor in San Bernardino, CA in 1986. Calvin was a 70 year resident of San Bernardino County where he lived, worked, raised a family and consistently contributed to those around him.