Written by Night For Vets on August 23, 2019. Posted in Gone But Not Forgotten 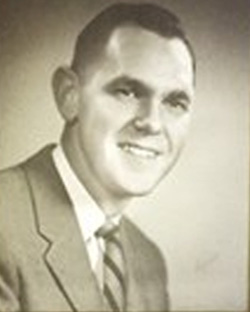 Carl J. Baumgaertner, beloved husband, father and grandfather, died peacefully on August 16, 2019, at the age of 95 in Pomona, California. Born on January 27, 1924, in St. Paul, Minnesota, Carl was the youngest of four children born to immigrant German parents. He attended St. Thomas Military Academy (’42) and graduated from St. Thomas College (’48). At age 19, Carl joined the U.S. Army where he served as an Infantry Company Commander in Patton’s Third Army. He participated in some of WW II’s most decisive campaigns, including Normandy, Saar River, and successful battles at the Maginot and Siegfried Lines. An unassuming man, Carl rarely spoke of his combat experiences, and it was only in later years that family learned of a distinguished service record that included a Silver Star and three Bronze Stars awarded for valor.

After returning home, Carl met his future wife, Mary Catherine Mahoney, at a classical music concert. Beneath a vivacious exterior, Carl recognized a woman of great depth who shared his core values. They married in 1948, settling in their hometown of St. Paul where they raised five children. Looking back, and especially in light of their children’s accomplishments, Carl credited Mary for her unfailing dedication to the family during those busy years.

Carl’s innate curiosity for electronics led him to a career in engineering. After completing post-graduate studies in Electrical Engineering at the University of Minnesota, he worked in the Minneapolis Aerospace Division of Honeywell for 20 years. In 1968, an intra-company transfer brought the family to Glendora, California. Over the next two decades, Carl and his family explored the natural wonders of the Golden State, enjoying numerous gatherings to celebrate life’s milestones.

During his time at Honeywell, Carl also worked with Harvey Mudd College’s engineering clinic, a program that teams students with external liaison engineers to solve real world problems. This opportunity presented exciting new prospects for Carl whose heart had always been in the practical rather than the theoretical side of engineering. His boundless fascination with the world of Newtonian physics, coupled with a love of teaching bright young minds the joy of discovery, led to a post-retirement position as Adjunct Professor of Engineering at the College. Beloved by students for his wit, warmth and unconventional teaching approach, Carl was a familiar presence both on the HM campus and at Pomona College’s weekly German table. For nearly 18 years he rode his bicycle 20 miles roundtrip from Glendora to Claremont, until finally retiring at age 86.

Outside of work, Carl greatly enjoyed the outdoors, whether canoeing in Minnesota’s boundary waters, backpacking in the Sierras, or snow skiing in the hills of the Midwest and mountains of the West. He was also a talented amateur photographer who passed on his passion for the art to his children and many of his grandchildren. Family and friends recall that Carl could fix almost anything, a gift that led to a small successful business in his later career and post-retirement. Always ready to lend a hand or a wrench, Carl was active in both his community and church, a willing volunteer for any and all projects. Carl remained grateful for the many blessings in his life. His humility regarding his own accomplishments allowed him to deeply appreciate those of others. Even with age, Carl never lost his child’s sense of wonder about the workings of the natural world, a quality that endeared him to all fortunate enough to know him.