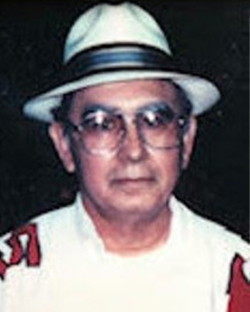 On August 11, 2022, Carlos Peter Mendoza peacefully passed after an eight-year-long battle with pulmonary fibrosis. Known to friends and family by childhood nicknames: “Booty” or “Nip,” Carlos wore many hats throughout his life. Chief Master Sargeant in the Air Force, Carpenter, Restaurant Owner, and Hypnotherapist were just a few of the careers pursued by Carlos, all indicative of a dutiful, constructive, and caring nature, as well as his dedication to serving others. Challenge was an old friend of Carlos. Growing up on a ranch in Arizona with no father-just his mother Mary, sister Carlotta or “Dido,” and extended family; the odds began and continued against him. Nevertheless, he found himself in far distant lands such as Thailand, Korea, Japan, and Portugal as the head communications officer, reporting to top generals and even the President. At the end of his life, family from across the country came to surround his gradual transition into a serene and peaceful forever sleep. The forever caretaker and lover of all who crossed his path rejoins his mother, Mary, and daughter, Felicia, in peace and freedom from earthly woes. He is survived by his wife Supatra, children Siam, Leonard, Dora, and Gail, grandchildren Dylan, Steven, Kristen, Eric, Sandra, Carlos Isaac, and Jacob, and great-grandchildren Noah, Ashley, Joshua, Brandon, Miquelah, Daniel, Erica, Keyana.