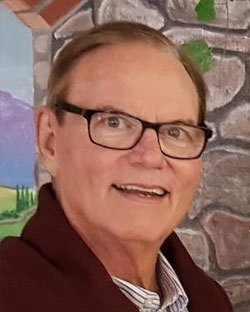 It is with great sadness that the family of Chandler Gill Brown announces his passing after a courageous battle with cancer, on December 26, 2020 at the age of 75 years.

Chandler, of Wimberley, Texas will be lovingly remembered by his wife of 17 years, Anna O’Farrell Brown, sisters Ann Keith, Roxann Carlton and Robin Brown, 6 nieces and nephews and his many friends. Chandler was preceded in death by his son, Cameron.

A California native, Chandler was born November 25, 1945 in Los Angeles to the parents of Merrill Brown and Virginia Chandler. He attended University of Arizona and Tucson Law School. After passing both California and Arizona bar exams, Army Sergeant Chandler Brown was drafted into the 3rd Armored Division, JAG corps in Germany.

After serving his country, Chandler dedicated his life and career to public service, mentoring youth and community engagement.

Early in Chandler’s career, he witnessed a need for mentoring and leadership among the youth in his community. He channeled this passion to provide education and guidance through his involvement in Boys and Girls Club and Camp Ryla, which focused on leadership skills for high school students in Ruidoso, New Mexico.

Chandler’s fatherly love and devotion stretched beyond his only son Cameron, to his nieces and nephews and the children of his dear friends. In addition, he and Anna joyously open their home and their hearts to 2 foreign exchange students. Filipe Zancul of Brazil and later Juan Carlos of Costa Rica.

With a love for the Spanish language and culture, Chandler and Anna became fluent in Spanish and relocated to both Costa Rica and La Serena, Chile. Local involvement in HOA boards, garden clubs and international organizations solidified lifelong friendships.

Chandler continued community engagement in Fort Collins, CO where he was a member of Sertoma, Newcomers Club, and the local Rotary in Port Townsend, WA.

Destiny and health concerns brought Chandler and Anna to their forever home in Wimberley, TX where they have been since 2016. Moving to Texas fulfilled Chandler’s lifelong love of country music and dancing.

Chandler deeply loved his wife and worked hard to stay connected with family and friends. He worked tirelessly to provide guidance and friendship to those around him. His laughter and sense of adventure will be truly missed along with his genuine interest in creating a purposeful life.