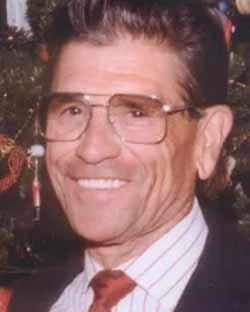 September 19, 1926 – June 29, 2022 Long time Hastings resident, family man, and businessman Charles J. Bruckman, 95, passed away at his home in Palm Desert, CA with his beloved, devoted wife Joy (Ricky) at his side on June 29, 2022. Charles, more officially known by his friends as Chuck, was born and raised in Hastings to Oren and Isa Bruckman and grew up with his brother Victor. They enjoyed summers together with their cousins on their grandparents farm and early on developed considerable mechanical aptitude which they both carried into later life. At a young age he became a voracious reader of fiction and non-fiction and remained so well into later life as he filled his mind with ideas and inspiration and motivation. He spent a lot of time at the YMCA and swam competition at local area swim meets. He was still religiously in the habit of swimming a mile every morning until about age 85. He was a paper boy for the Tribune and when he developed an interest in photography, he convinced the Tribune to officially issue him a Speedgraphic camera and make him a junior press photographer. Later in life he did studio and dark room work for a couple of local studios. He worked as a mechanic for the Clarke Hotel Garage installing Fulton visors, and he was the boss’s favorite for that job. He spent a lot of time at the Hastings Museum and knew Albert Brooking personally especially after he and Vic commandeered the museum’s railroad hand car and drove it down the street a ways just for fun. He had a fascination for radio well before TV became popular and enjoyed scanning the bands to see what was there to be heard. His father was a professional musician, playing trumpet in local bands, and he instructed Chuck to play as well. He played in various local dance bands and did some college level instruction and orchestra conducting at Kearney State Teachers College. Upon high school graduation he enlisted in the US Navy during wartime where he trained to fly Corsairs off a carrier deck. The war ended before he got to do that but he caught the aviation bug to pursue in later life. He met and married the love of his life in 1946 and raised two children Monty and Rikki, who were both involved in the startup of Bruckman Rubber Company in 1960. Sixty two years later and into the third family generation, his pride and joy lives on strong in his memory. He pursued his aviation interest by obtaining his private pilot license and purchasing two new airplanes and several used ones through the years and enjoyed flying the US from coast to coast just to see what was there, and also flew aerobatic contests, winning several high level awards. He grew tired of the Nebraska winters and when retired from the daily operation of the company, moved to California in 1989, where he and Ricky spent lots of time enjoying and entertaining their grandsons during many visits for Thanksgiving and Christmas and just to visit. He enjoyed lots of big name professional entertainment in the Palm Springs area and especially the yearly Dixieland Festivals. Chuck started from somewhat humble beginnings, but became a brilliant businessman, wonderful husband and parent, kind, honorable and generous. He was a role model and friend and confidante to his family and intensely supportive to them as an icon and inspiration and as an American success story. He provided a rich, wonderful life for his family and business associates, and though he is sorely missed, we revel in his proud, honorable legacy. His intelligence, wit and sense of humor are rarely known and we have been blessed to have been part of his life. It has been the ultimate honor to be his son. Charles is preceeded in death by his parents, his brother, his daughter Rikki, his grandparents and aunts and uncles and in-laws and cousins, his niece Julie and nephew Carter. SURVIVORS: Wife: Joy M. Bruckman Children: Monty D.Bruckman & daughter-in-law Lorraine Bruckman Grandchildren: Charles E. Bruckman & Monty D. Bruckman II Sister-in-law: Margaret Bruckman Several nieces and nephews.