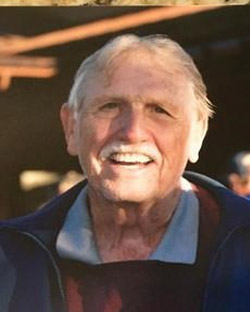 June 14, 1942 – October 1, 2021 Charles "Charlie" Nicholls passed away at his home in Talking Rock Ranch in Prescott, Arizona with Rose, his dearly loved partner, by his side. Charlie loved to talk about some of his fondest times with his grandparents on their farm in Kansas. He started riding on his grandpa’s big paint horse when he was 4 years old. As the summers went by, he loved to get up at dawn and sit on the porch steps waiting for his grandpa so he could help with the chores on the farm. Charlie’s dad served a life-time career in the U.S. Air Force. His father was decorated for his service in both World War II and the Korean War. Charlie and his family moved frequently during his father’s time in the Air Force. Charlie would tell stories of the times when he was in high school in Alaska and his mom taught him how to jitterbug in the basement. She told him it was a good way to meet girls. He was a great dancer for the rest of his "dancing" life! Charlie loved playing Over the Line in San Diego, his time with friends in San Felipe and on the Colorado River, his and Patti’s horses and Golden Retrievers, golf with buddies, and Elvis Presley. It was a special treat when Charlie would call and wish you a happy birthday with a truly good rendition of Elvis singing "happy, happy, happy birthday". From 1962-1966, Charlie served in the U.S. Air Force in the White House Honor Guard during the Kennedy-Johnson Administration. He moved on to have a successful career with NCR in Southern California before starting CDM, a commercial real estate brokerage and development company in Temecula, California, with his late wife Patti. Over the next 25+ years, Charlie played an important role in the growth and development of the communities of Temecula and Murrieta, in both residential and commercial/industrial development. During this time, Charlie was also very involved in community service. Charlie was a Past President of the Temecula Sunrise Rotary Club and served as the Assistant to the Rotary District Director. Following in his father’s footsteps, Charlie was a Mason with the Consuelo Lodge No. 325. Charlie was a longtime volunteer and fundraiser for S.A.F.E., a local domestic abuse prevention organization. Charlie was preceded in death by his parents Emerson Joseph Nicholls and Marie Ellen Cotten Nicholls, his brother, Richard, his beloved wife of 25 years, Patti, and his beloved daughter, Carrie. Charlie is survived by his loving companion and partner, Rose; his children John, Tricia and Dave; his grandchildren Steven, Travis, Chelsey, Ethan, Emma and great granddaughter Nora Belle. Charlie will be greatly missed by those who loved him from all walks of his life. Rose wishes to thank Alan Wikman of Synergy Home Care and his exceptional caregiver Susan Mathwig, Compassus Hospice Nurse Fritz and Dr. Reid, Laurie Cheney family friend and retired RN, best friend Judy Rosen and music therapist Susan Falk for all the kindness and care given to Charlie in the latter days of his life. A military service with honors will be held at Riverside National Cemetery followed by a celebration of life in Temecula, California.