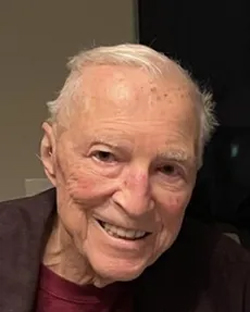 Charles Raymond “Ray” Ort, Jr. was born in Louisville, Kentucky to parents Charles R. Ort, Sr. and Irma B. Kebsch on September 5, 1923. At age eight, following the death of his mother, he and his two siblings entered St. Joseph’s Orphanage where they spent their formative years, with Ray watching over his younger sister and brother. In 1942 Ray joined the US Navy, initially seeing action in the South Pacific, then rotating stateside to serve at the Industrial Command Base in San Diego. It was there he met and married his wife and soul mate of 77 years, Mariana Hillman, who preceded him in death by seven months. Ray was a man of his own making, unique in character and imbued with core values of fairness, honor, and integrity. Shaped by the global events of his time, he was emblematic of his generation: he held in high regard industriousness, honesty, and commitment. He embraced family and dear friends, believed in the strength of community, and felt it was incumbent on each to make society civil and strong – often leading by example. Although kind and of even temperament, he was perceived as a role model by those who knew him, a position he neither sought, proclaimed or was willing to acknowledge. He was thoughtful and generous and always willing to help. Following the war, Ray moved with Mariana to Eagle Rock, an L.A. suburb, where he eased into Mariana’s large extended family and circle of friends. There, they began their family, started careers, and set in motion scores of social and recreational activities that became years- long traditions of gatherings, camping trips and excursions. While working as an engineer and then engineering manager at Pacific Telephone for 37 years, he and Mariana planned and built nearly a dozen homes in Los Angeles, Arcadia. Orange County, and in the foothills of California’s “gold country”. Upon Ray’s retirement they enjoyed boating, motorhome travel, golf, and friendships wherever they went. They visited every State in the union and were very proud of our beautiful country. Although you would not hear it from him, Ray excelled wherever he put his attention — his work, his hobbies and even sports. He was an accomplished golfer, bowler, ballplayer and even a champion horseshoe player, a skill he learned from the Brothers while growing up in the orphanage. In 1994, they settled into their Sun City, Palm Desert retirement home, becoming among its first residents. Both he and Mariana continued to stay very active, socializing with many friends — old and new — for over two-dozen years. As years advanced and the circle of friends and family grew ever smaller, they enjoyed their mutual love and partnership of 77 years until Mariana passed in September 2021. His life partner now gone, duties dispatched, and obligations fulfilled, Ray passed peacefully several months later, April 16, 2022, with family nearby. It was a life well-lived, and he was grateful. Ray was predeceased by Mariana and his eldest son Stephen. He is survived by his sister Helen Marcella Freeman, son Michael, granddaughters Jennifer and Laura, grandson Paul, four great- granddaughters Sarah, Amanda, Natalie, and Rachel, and one great- great-granddaughter, Maya.