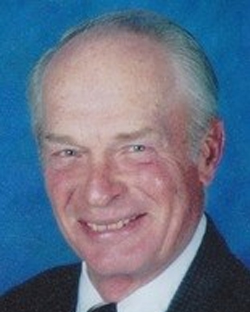 Jerry was born in Lake Forest, Illinois to William (Happy) and Viola Siegel and spent his childhood in both Illinois and Brockton, Massachusetts where he graduated from High School in 1956. He then chose California Institute of Technology over MIT to play more golf. An aeronautical engineering student, he took classes from the likes of Richard Feynman, while his athletic build was noticed by Cal Tech coaches and he also ended up playing football and numerous sports. It seems that brilliant minds also create brilliant pranks and the stories he shared of the creative, ingenious hijinks of his classmates are legendary. His Cal Tech, ROTC time led to his Air Force career after graduation. He studied engineering to design planes but really, he just wanted to fly.

A decorated F-4 fighter pilot, he served in Vietnam, flying 152 combat missions. Later in life, he shared harrowing war stories including air-to-air combat with Russian MiGs. He never forgot his fallen comrades. After the war, he served as a flight instructor and safety officer, stationed at George AFB, Lakenheath, England and one year in Korea. He retired in 1982 after 21 years of service, then returned to aerospace engineering with Rockwell and General Dynamics, while also working briefly for the Daily Press. He was a pilot and an engineer through and through, but also a writer and an artist, a man with a keen wit and sense of humor and an encyclopedic knowledge he loved to share, at length.

Golf, however, was his passion second only to his beloved wife Donna, from caddying as a teenager to make money for the family to a golf moment with Bob Hope during a Viet Nam USO show. A fine golfer, he also coached the Apple Valley HS boys golf team, served as an Apple Valley Country Club board member, and advocated tirelessly for the course. He played for 44 years on the AVCC course until Parkinson’s slowed his body.