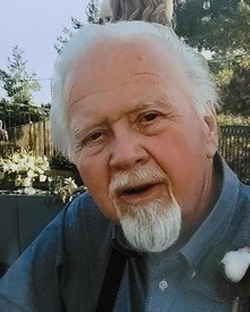 Charlie was born in Long Beach, California and later moved to San Bernardino where he attended San Bernardino High School and San Bernardino Valley College. He was a proud veteran of the U.S. Army, and served during the Vietnam conflict. Upon his return home, he attended the University of California at Riverside, majoring in Geology. Charlie owned Bear’s Tackle in San Bernardino for many years. He officially retired in 2006, but his love for fishing was never forgotten. Charlie first learned to fish as a young boy while vacationing at the Colorado River with his grandparents, Fred and Goldie Peters. As an adult, he took many long-range trips out of San Diego on board the Spirit of Adventure. He often chartered trips to Loreto, Mexico, for groups of 30-plus and made many life-long friends. Charlie loved Mexican food, Willie Nelson, gospel music, playing cribbage, and wife Diane’s pumpkin pie. Charlie passed away on September 19, 2020 in Beaumont, CA. He was 76 years old. Charlie is survived by his wife Diane of 31 years, his sister and brother-in-law Sylvia and Randy Mudrick of Brea; stepsister Kathi Shuler of Littleton, CO; his brothers-in-law Mark Harp of Cherry Valley and Kenny Harp of Calimesa; his “adopted” son Lee Washington and his “adopted daughter and son-in-law” Luke and Diane Kunkel of Carlsbad, NM, and their three children, Kylee, Kellen and Kallie, who loved their Papa Charlie.