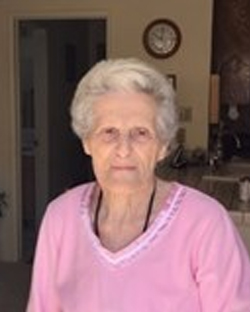 Christine L. Lamb, 92, died unexpectedly June 22, 2019, at Baptist Hospital East, Louisville, Kentucky. She was born April 15, 1927 at Monongah, West Virginia, the fifth child of 12 born to Quintilliano (Claude) and Elizabeth (Fazio) Domico. Christine attended Thoburn High School before eventually earning her GED. She entered the United States Navy in July 1945 where she was a Pharmacist’s Mate Third Class. She served at Bethesda Naval Hospital until May 1947. Christine was very proud of her military service. She married her one true love, Raul R. Lamb (formerly Lamborghini), on June 10, 1950, in Cleveland Heights, Ohio. They remained married until his death in July 1963.

Christine relocated to California with Raul in the early 1950’s and lived in Pomona and La Verne, California most of her life. She moved to Kentucky when she was 90. Christine’s greatest devotion was to her children, grandchildren, and her Catholic faith, all of which defined her life. She was a long-time parishioner of St. Joseph’s Catholic Church, Pomona and Holy Name of Mary Catholic Church, La Verne. While at St. Joseph’s she served on the Altar Society and was a member of the YLI (Young Ladies Institute). Later, after her retirement from retail employment, she became a member of the Legion of Mary, walking door-to-door spreading devotion to the Blessed Mother for over 12 years. Christine was an avid competitor, enjoying bingo and playing cards, especially canasta and shanghai. She was a true sports fan and loved Angels baseball, college football, and professional golf.