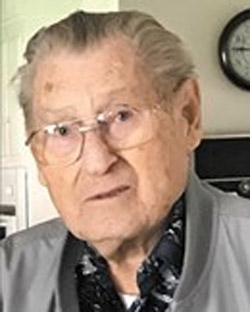 Cidon passed away on Friday, June 15, 2018 in Redlands, CA at the age of 92. He was born on February 22, 1926 in Anson, Texas to William Dewey Long and Thelma (King) Long. He started working at a very young age gathering baby chicks, that fell off the trains, to sell them. The family migrated between Texas and California multiple times looking for work.

He was in the Army during WWII with the job of guarding German prisoners in Bakersfield, the projectionist at the Presidio in San Francisco and a driver for a high ranking female officer. On April 4,1945 he married Eva Bernice Donaghey in Hamlin, Texas, celebrating their 73 Wedding Anniversary this year. They made their home in Redlands, California right after they married, raising 3 children. He worked for Sliger’s Music, Burroughs, J.C. Penney’s and Harris Co.

Cidon was a very quiet, talented man. He could cook and bake, pecan pie being his favorite to bring to every family gathering. He worked with wood, making gun cabinets, burl clocks and tables. In his late 80’s he took up making handmade quilts, which every one of his children, grandchildren and great-grandchildren has a quilt made by him.