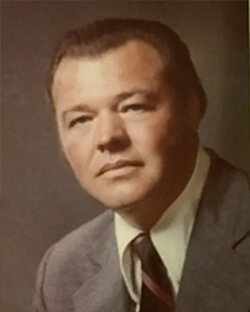 Clark Albert Hansen Jr. age 89 passed away peacefully on Monday September 20, 2021. He was born on November 1, 1931, in Long Beach California to Clark Albert and Alberta Aileen (Hodge) Hansen. He graduated from San Bernardino High School in 1949 and attended San Bernardino Valley College before enlisting in the Navy in 1951. While serving in the Navy he met and married his first wife and mother of his children, Catherine (Kay) Mary Margafen on August 18, 1953. He was Honorably Discharged from the Navy as a Corpsman/Physician Assistant. After discharge he worked at Stater Bros Markets while attending UCR. After graduating from UCR he became a teacher at ArrowView Jr High in San Bernardino. While teaching full time at ArrowView, he attended night classes at USC Law School and graduated with a Juris Doctorate in 1963. After law school he was employed by the law firm Chapman and Sprague in San Bernardino as an attorney. Subsequently he became a member of the San Bernardino County District Attorney’s office as a Deputy District Attorney and left in 1978 as a Chief Deputy District Attorney. He became a partner in the law firm of Delatore, Caldwell and Hansen in Victorville until 1986. During this time, he and his wife Kay moved to Spring Valley Lake where he resided for over 40 years. In 1986 Clark again joined the San Bernardino County District Attorney’s office as a Special Advisor to the Grand Jury until his retirement at 76 years of age in 2007. Kay passed away in 1989 and in 1991 he married Janine Rae Russell until her death this year. He was preceded in death by both parents and brother Alan John Hansen, a son Peter Alan and daughter Christine Marie (Hansen) Brewer. Clark is survived by his four children, Mary Margaret (Hansen) Hamner, Clark Albert and Janet Ann (Bourgeois) Hansen, Andrea Ann (Hansen) Graham, and Craig Andrew and Kelly (D’Andrea) Hansen, 14 Grandchildren and 11 Great Grandchildren, his sister Elois Jean (Hansen) Schulte and Tom Schulte, and his many nieces, nephews and great nieces and nephews.