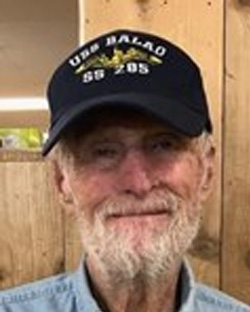 Loving Father, Loyal Veteran, Gifted Businessman, Lifetime Scholar, Generational Mentor. Born to Josephine and Columba J. O’Gorman in Manchester, CT. Crossed the river in Vista, CA surrounded by love. Colly will be missed by all who knew him for his positive outlook on life regardless of circumstances. Colly joined the U.S. Navy in 1943. After training, he was accepted to the U.S. Naval Submarine Service. He served out of Pearl Harbor on the USS Baleo as a Quartermaster, Second Class. Colly’s final voyage was in the Sea of Japan when the nuclear bomb was dropped and the war ended.

Throughout his adult life he remained very active in National and Regional Sub Vets groups and led the last remaining WWII group before it was consolidated due to so few living members. When the war was over Colly settled in suburban Los Angeles where he used his GI bill to attend USC and earn a degree in Sociology. While in school, he met his wife Marilyn (McCourt) with whom he had five children from 1950-1960. They moved to Riverside for his work with W.Ross Campbell Co. in 1959. As an industrial real estate professional over the decades, he became an icon to many fellow businessmen and officials. Colly “retired” around age 90, although it was never announced. From that time he continued to act as a consultant for O’Gorman Pacific Realty, Inc. with his son and mentee, Shawn. Eventually, he moved to Oceanside and San Clemente to be closer to his children.

Colly was a voracious reader with an insatiable curiosity about the world. He wondered about everything from molecules to religions. He could converse with anyone about anything with some knowledge or reference.

Colly was preceded in death by his wife Marilyn, daughter Peggy, son Kevin and grandson Christopher. He is survived by his daughters Errin Love and Maureen “Mymy” Cade, son Shawn, 10 grandchildren and 24 great grandchildren. He is also survived by his second wife, Janie Shaw, with whom he had many good years.