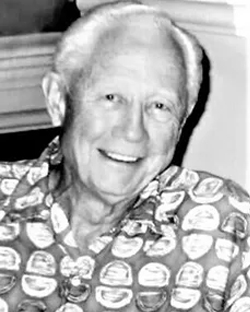 Cooper was born on July 6, 1926 & grew up in the small town of Eden Mississippi (pop 200) in the heart of southern cotton fields and catfish farms. He spent most summers barefoot and playing baseball (with shoes) and enjoyed shagging fly balls for the local traveling semi pro baseball team. In 1939, in the heart of the Great Depression, with no jobs to be had in the South, Cooper and his family drove out to California, arriving in the Golden State with only $100 to their name. He played baseball at Hollywood High School and later at UCLA. Cooper entered the Navy at 18 years old and was stationed across the country, playing Navy baseball when he could. In 1947, he met the love of his life, Mary Ellen, at a costume party at UCLA. They went on to spend 75 beautiful years together, marrying two years after their meeting. They had two sons, Tom and George. After graduation from UCLA, Cooper went into the insurance industry, where he worked diligently the rest of his career. He worked with Great Basin Insurance in Reno, Nevada, where their sons were born. Great Basin merged with a company in Southern California and the Blanton family moved back to Southern California, where they raised their family. Cooper went on to accept a job with Mercury Insurance in Los Angeles in 1968 and quickly became the head of underwriting, later earning a Chartered Property Casualty Underwriter designation. His contributions as VP over the next 38 years helped Mercury become a major force in the auto insurance business in California. Upon retirement age, he was specifically asked to stay on for a special project to open several new companies after he was 65 years old. He commuted to Oklahoma City, Atlanta, and Illinois many weeks a year and enjoyed growing the business and meeting a lot of really nice people that worked with him. In 2004, Cooper and Mary Ellen toured the world in 80 days. They retired to La Quinta and spent summers in Carlsbad. He passed in Glendora on June 18, 2022. His generous nature and playful sense of humor will be missed by all. He is survived by his wife, Mary Ellen, sons Tom and George and their families.