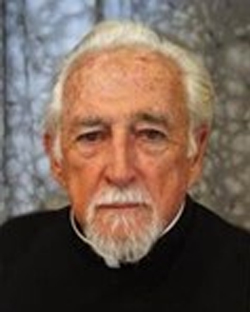 He completed his seminary studies at the University of Niagara, receiving his B.A. in 1944, and his M.A. in 1947. Msgr. Connie was ordained in 1948 at the Cathedral of the Immaculate Conception in Camden, NJ. In 1955 he joined the United States Air Force and attended Chaplain School at Lackland Air Force Base in Texas. He then served as a Catholic Chaplain in many places such as Bermuda, Bitburg, Germany, and finally in Riverside, CA. While in Germany, he took a trip to the Vatican City and met Pope Paul VI in 1970.

Once he settled in California, Msgr. Connie received his PhD in Ministry from the San Francisco Theological Seminary in 1980, and a second PhD in Philosophy in Leadership and Human Behavior from the United States International University of San Diego in 1984. Msgr.

Connie is survived by his two loving nieces and their spouses, Sheila and Dr. Christian Heineken of Shelton, CT, Patricia and Thomas Maguire of Milford, CT; several great-nieces and nephews; as well as two devoted friends, Lya O’Brien and Linda Kocian. He is predeceased by his parents and his two brothers, Charles and John.