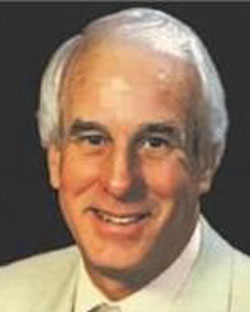 Dale Stretton, a 53-year resident of Victorville, passed away peacefully at home on August 7th, 2020 at age 88. Dale was born in Cleveland, Ohio, on May 21, 1932, and his family moved to California when Dale was a young child. He graduated from Chaffey High School in Ontario, CA in 1950, and joined the Coast Guard, ready to take on the world. He married his high school sweetheart, Beverly, in February, 1951, and they remained married until her passing in 2005. After serving a 3 year tour of duty patrolling the San Francisco Bay while stationed in Oakland, Dale and Bev moved to back to their beloved Southern California where they started their family, which would grow to include 4 happy children; Alan, Lori, Ronnie, and Janet. Dale had an accomplished career in sales, most recently as a real estate broker. He loved nature, especially the ocean, and he loved to swim. He loved kids, dogs and cats, and family was always very important to him. In 2017, his family grew again when Dale married Leatrice, and gained a new stepdaughter, Vicki. Dale was preceded in death by his parents, Archie and Helen, wife Beverly, and his oldest son, Alan. He is survived by his wife, Lea, son Ron, daughters Lori and Janet, stepdaughter Vicki Vandruff, sons-in-law Todd Tatum and Dan Sauerwald, and his sister Susan Garrett.