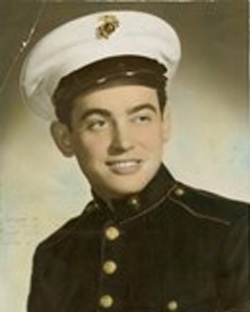 Daniel Massagli, age 92, passed away at home February 11, 2020 surrounded by his family. Daniel was born on June 7, 1927 in Lucca, Italy. He and his family crossed the Atlantic in 1930 and settled in Perth Amboy, New Jersey at the beginning of the Great Depression. In 1943, Daniel contributed to the Second World War as a merchant marine shipping supplies for the war effort. Later he enlisted in the United States Marines Corps where he continued to serve towards the end of WWII.

Daniel moved to California in 1952 with his first wife Marie and 2 daughters Donna and Darlene. He had a younger brother Marino "Ralph" Massagli who was his best friend and business partner. He and Ralph ran 2 very successful patio businesses, Tru-Lok and California Patio from 1961 until they both retired in 1998. Daniel married Judy Jane Buck on June 1, 1967 in Brea, CA. Together they raised 5 children and enjoyed coaching soccer, attending their kids and grandkid’s sporting events and camping. Daniel and Judy spent 52 happy years together.

Daniel especially enjoyed hunting, fishing trips to Alaska and horseracing. He also enjoyed bowling, golf, softball and trips to Las Vegas with his friends and family. He was a long-time member and President of the Son’s of Italy. Daniel made an impression on every person he met with his sense of humor and mischievousness. He was a great husband, father, grandfather, brother, friend, mentor and will be deeply missed, but never forgotten. Daniel was truly one of a kind. His eldest daughter Donna Prescott preceded Daniel in death.