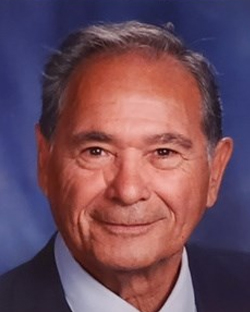 Danny H. Diaz, of Upland, CA, passed away at home surrounded by his family on December 26, 2020 after a month’s struggle with COVID. Danny was born July 24, 1932, in Pomona, CA to Jennie Hernandez and Braulio Diaz. He married his beloved wife Rose Carmen Ramirez on May 2,1959. Together they raised two daughters – Marie Anne Diaz (deceased) and Cheryl Denise Lesniewski (Kenneth Edward). Danny lived his entire life in the Pomona/Upland area, where he received his education and was employed. He was recruited into the U.S. Army in 1952 and served as a specialist in the communications department. He received an honorable discharge in 1964. He was employed at General Dynamics, Pomona, California for 41 years as a group engineer where he supervised electrical, mechanical and test engineers in the design of automated test equipment. Danny enjoyed all sports but handball and boating were his favorites. He loved hitting the little ball and running after it to hit it again. He would run so fast he would bang into the wall. He always had time for his family. Many times he would take us to Catalina island on his Searay cruiser. We were never scared of the big ocean because we were with him. He also had many other hobbies and interests. After retirement he took up cabinetry and redesigned and upgraded our kitchen and bathrooms. He was also quite the handyman around the house. There wasn’t a thing he could not fix. He was a loving husband, father, grandfather, uncle and brother, and friend who will be dearly missed. Danny was preceded in death by his daughter, Marie Anne Diaz, his 2 brothers Jesse, and Louis Diaz, a sister Margie Leon, and his parents. He is survived by his wife Rose, daughter Cheryl Lesniewski, son’ Edward Kenneth Lesniewski, grandson Edward Jr., his brother Joe Diaz, nieces Aileen Jimenez, Jeanette and Alicia Leon, Jenny Diaz and nephews Bobby Leon, and Joe, Diego, Michael and Daniel Diaz.