Written by Night For Vets on September 28, 2020. Posted in Gone But Not Forgotten 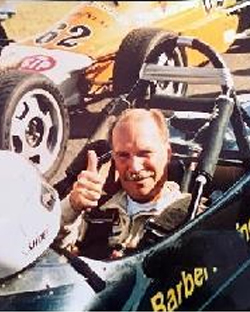 DAVID W. MARSH November 11, 1942-September 17, 2020 The longtime Riverside resident passed away last Thursday at home with his daughter Grace Marsh and fianc‚ Frieda von Bauer at his side. Born in Corvallis, Oregon to Dr Albert and Elizabeth Marsh. The family moved to Riverside in 1955 where Dave was in the first graduating class of Ramona High School. After a hitch in the army in the 60’s as a nuclear arms inspector, he returned to civilian life and dove into academia earning a masters of mechanical engineering from Cal Poly. Dave was a brilliant and uncompromising engineer in a career spanning decades with local firms Wyle Labs and Toro. Dave’s passion was cars and auto racing. He raced NASCAR Sportsmen stock cars at the Orange Show Speedway in the 70’s and to his enjoyment, sometimes winning. Throughout his life he built and tinkered with cars including a 1930 Ford Model A street rod, many Datsun 240 Z’s, several Jensen Healey’s, and vintage 60’s Camaros. Later in life he had the joy of being Mr. Mom with his newborn daughter Grace and as she grew older they delighted in long road trips together in his bright red Corvette. Upon Frieda’s retirement, they traveled extensively to South Africa, Panama Canal, Mexico, Australia, Zimbabwe, Belize and throughout the States including Alaska. Survived by his daughter Grace, fianc‚ Freida, brother Dan (Margaret) Marsh, former wife Tamara Marsh, and a backyard full of old car parts. Cruise on Dave. You were a source of inspiration, pride and leadership to all around you.