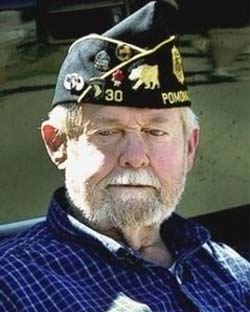 September 20, 1936 – July 24, 2022 David R. McLaughlin passed away peacefully on July 24, 2022 at Pilgrim Place Health Services Center, Claremont CA. David was born in Ravenna, OH on September 20, 1936 to Robert and Helen McLaughlin of Mantua, OH. He was preceded in death by his beloved wife of 59 years, Bonnie Dean McLaughlin. He leaves behind son Daniel McLaughlin (Heather) of La Verne, CA, daughter Noreen Stearns (Donald) of Upland, CA, granddaughters Jenna Stearns and Megan Nehring, grandsons Caden Stearns and Nolan Nehring, and great-granddaughter Elara Nehring. He also leaves his sister, Bonny McLaughlin of Henderson, NV, sister- and brother-in-law Roberta and Bill Midgley of Wildomar, CA., and sister- and brother-in-law Connie Mahita and David Hatton of Henderson, NV. He will be mourned by his nieces and nephews, cousins, and many close friends in La Verne, CA. Dave was a long-time resident of La Verne, serving as a reserve fireman from 1968 to 1988, and as Santa Claus for the Fire Department’s Christmas morning celebration from the early 1970s to the 1990s. He also served in the U.S. Army, 101st Airborne Division from 1956 to 1959. He was a proud member of the American Legion Post #30 of Pomona, CA, and faithfully attended parades and ceremonies on Memorial Day, Independence Day, and Veterans’ Day. A brick with his name and service is displayed at the La Verne Veterans Memorial. Dave was employed by the Yellow Freight Company and Coast Foundry of Pomona.