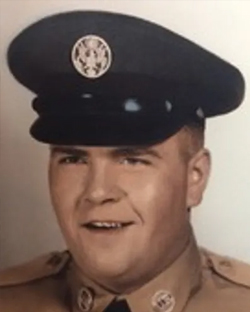 David was born on February 4, 1935, to William Albert (Bert) and Ruth Elizabeth Puckett born Meier in Ogilvie, MN. When David was 12, he and his mother Ruth moved from Quamba, MN to Bell Gardens, CA to live near family.

David was a Vietnam Veteran who enlisted in the Air Force at age 18 and spent the next 20 years at various bases including Germany, Thailand, and California. He met his future wife, Johanna Jaschke, in Germany and they were married in 1957. They had three children – Michael (born 1957 in France), Joseph (born 1959 in CA), and Deborah (born 1962 in CA.)

After retiring from the Air Force, David spent the next 48 years of his life in CA including Apple Valley, Victorville, Riverside, and Barstow. David was very involved in his church – especially the Food Outreach Ministry – in Victorville over the years and had many friends there.

The last five years of David’s life were spent living close to his granddaughter Arielle Hernandez born Cheika and her husband Robert along with his five beautiful great grandchildren Joey, Hannah (born 2014), Emilia (born 2015), Samuel (born 2017), and Gabriella (born 2020.) David repeatedly stated they were a miracle in his life.