Written by Night For Vets on January 24, 2020. Posted in Gone But Not Forgotten 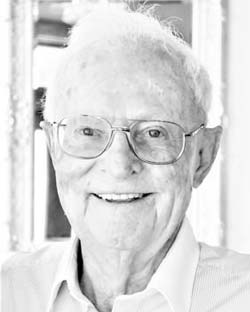 David Marshall Sawyer passed away suddenly yet peacefully Friday January 10, 2020, age 91, while exercising one of his great pleasures, reading the newspaper at breakfast.

David was born November 4, 1928 in Wilmington, North Carolina to Lucile Wallace Hardwick and Enoch Moore “Tom” Sawyer. The family moved regularly throughout the Southeast as Tom worked as a Marine Engineer for the US Coastal and Geodetic Survey. After graduating high school in Norfolk, Virginia, David enlisted in the US Army and served during the US occupation of Japan in 1946-47. Upon his discharge, David attended the University of California at Berkeley, worked with his father while surveying the Aleutian Islands, studied at North Carolina State University, and graduated from San Jose State University with a Bachelors followed by a Masters in Psychology.

David met his first wife, Betty Derby, in San Jose, and they had two sons, Laurence and Eric. The family moved to the Monterey Peninsula in 1959. David worked for the Monterey Peninsula Unified School District as their Staff Psychologist; then in 1967 went to work for Monterey Peninsula College as a teacher and counselor. David and Betty nurtured their love of the outdoors and nature, joining the Sierra Club and leading numerous group outings, and taking advantage of summers off to take the family camping and backpacking.

David married his second wife Marcia (Stribley) Evans in 1976 during a sabbatical from MPC in Seattle, Washington, and they settled back in Monterey. David retired from MPC in 1986 as Director of Counseling. Upon retirement, David and Marcia spent six months traveling throughout the US in their pickup and travel trailer, then settled in Oak Harbor, Washington on Whidbey Island. David volunteered as a Guardian Ad Litem for juveniles in Island County. They traveled extensively throughout Europe, plus tours of China and Southeast Asia, and solo trips for David to South America, Scotland, and Japan. A search for warmer winters led them to Palm Springs, California where they moved full time in 2000. David volunteered for the US Forest Service at the visitor center at the top of the tram on Mt San Jacinto, and as a docent at the Palm Springs Air Museum, where he re-kindled his interest in World War 2 Pacific Theatre history.

David moved into the Sunrise Senior Living facility in Monterey in 2019. The family would like to thank the Sunrise staff for their loving care.